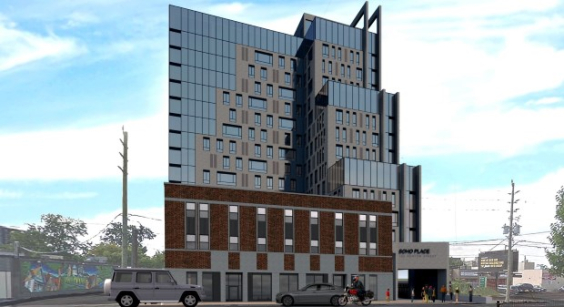 The school has applied to build the tower immediately behind its three-storey brown brick student residence, which serves as a girls’ dormitory, said school principal Paul Debenham.

The academy’s male students now live at a residence at 186 King St., also site of a supervised drug use site, and the school wants to house those students near the girls’ dorm.

“We would like to have all our students in one place. It would be more convenient,” said Debenham.

“It will be very beneficial and hopefully not too intrusive. It will be a very good thing, development is needed there.”

The academy has about 230 students, mostly at the Grade 12 level, said Debenham. It also teaches some students in grades 9 to 11.

The school’s application to rezone the land for the tower has yet to reach city council’s planning and environment committee.

When the school opened in 2002, it only housed students from China. Now about 12 per cent of its students are from other countries, including nations in Africa, the Mideast and Eastern Europe, Debenham said.

The city is now seeing several highrises built in the core area, including a York Developments tower on King Street, a Tricar building on Thames Street, between Horton and York streets, and Old Oak projects including a tower on Richmond Street and a multi-tower complex at Fullarton, Talbot and Dufferin streets.